Accelerating a Bachelor’s Degree in Business with Competency-Based Education: A StraighterLine Success Story 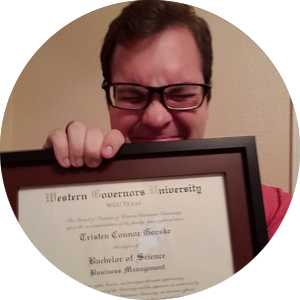 Connor’s mom has cancer. It’s awful. It’s horrible. It’s unfair. And it’s terminal. Connor, however, feels like he has a choice. He can either give up and give into the deep sadness of the situation – or transform his grief into something meaningful, a gift for his mom.

Connor chose the latter. Connor decided to complete his college degree as fast as he possibly could. Connor’s mom had always wanted to see him earn his bachelor’s degree, but he knew he had limited time. So he set a goal to give his mom his degree for Christmas, even though it was already summer, realizing that he’d need to find the time to complete his bachelor’s degree as quickly as possible.

“My mom is dying – and as it gets closer to my mom’s death – it really hit me that the one thing she wanted me to do was get my degree.  Even though it was already summer, I decided I wanted to get my mom my degree for Christmas,” said Connor.

Connor’s decision is a big deal. He works full time. And money is very tight. And he would need the course flexibility to accelerate the completion of his degree in order to be finished by the end of December.

“I made this decision starting in August of 2016. At that time, I still had 15 classes to complete in order to finish my degree. But I knew I could do it. I was beyond motivated,” said Connor.

Prior to Connor’s mom’s cancer diagnosis, Connor had been working at Dunkin’ Donuts – where he had worked during his high school days, and now found himself working at once again after finishing a year of college at the University of Texas.

“I first started looking into online degrees after finishing my first year at a traditional university. After that year, I dropped out. I moved to be closer to home and spent the year trying to save up enough funds in order to go back to school, “ said Connor. “At the time I was starting to look seriously into online degrees and trying to figure out some cheaper options, when my boss at Dunkin’ Donuts recommended me to PelotonU, an organization that helps working students navigate completing their college without adding on extra debt.”

Through PelotonU, Connor learned about the flexible and affordable degree options that were available to working students – and was introduced to StraighterLine online courses.

“When you first start working with PelotonU they have you take a test to make sure you are ready for their program. They want people to succeed in earning their degree and are there to help guide students through the degree process. I was really nervous, but I scored perfect on that test. I even skipped one of their steps – they had me start taking classes at StraighterLine right away,” said Connor.

Accelerating a Bachelor’s in Business with Competency-Based Education

Connor’s first big step towards completing his college degree was enrolling in online classes at StraighterLine. The very first online college class that he took was StraighterLine’s Accounting 1.

“Before taking classes at StraighterLine, I had thought that earning a degree online would be pretty easy. But I quickly realized that not having an instructor would be a challenge. I had to hold myself accountable for really knowing what was in the textbook,” said Connor.

Connor ended up completing 4 self-paced online courses through StraighterLine in record time. With online education, he found a way to earn a degree on his terms, and on his time table.

“At a traditional school, you learn what to study based on what the instructor says to study. But when you take classes online, it’s self-paced and self-directed,” said Connor. He added, “Fortunately, I’ve always been good at self-pacing, and can catch on quickly to concepts faster than most people. I have a really good memory. Following the textbook made my [academic] life easier.”

Connor’s advisor at PelotonU helped guide him around which courses to take at StraighterLine. “I ended up taking the 4 courses at StraighterLine: Business Ethics, Accounting 1, Accounting 2, and Intro to Religion,” said Connor. By that time, he had decided he would earn his degree at Western Governors University (WGU), a StraighterLine partner college.

Want to see how it works? Take two free lessons on us today!

Tips for Earning a Degree Faster

In order for Connor to earn his degree by the end of the year, he broke down his goal into a series of daily goals.

“I set myself a goal for each day. I would determine exactly what I wanted to accomplish each day,” said Connor. He added, “For example, when I was taking Accounting 1 at StraighterLine, I would sit down and complete my school work right after I got home from work. Or before I’d go to bed, I’d make myself take notes on 2 chapters. I wouldn’t do any more or do any less. I literally took it one day at a time.”

Advice to Other Students Enrolling in a Competency-Based Degree Program

“I think competency-based education makes the most sense for someone who is self motivated,” says Connor. “I know students who need someone to walk them through everything. There’s nobody to be on you like that with competency-based education. There’s no one saying you need to pick up the pace – because you set your own pace. You need to be able to motivate yourself.” For Connor, however, the best part about earning his degree online was his ability to accelerate the completion of his degree.

Through competency based education, Connor was able to complete his degree by Christmas – and, in turn, was able to surprise his mom with his diploma underneath the tree.

“The staff at WGU sent me my diploma right before Christmas. They were lovely and supportive,” said Connor. He added, “I had alerted my mentor about why I was working so hard to get my degree completed so quickly -- she had to approve all my classes. She knew time was in short supply. When I completed my last class, she worked on my behalf behind the scenes to get my degree approved, and my diploma sent the day after I finished. I finished all my required courses on December 12th, and I got my diploma in my hands on Dec. 14th.”

I Love You Mom

When Christmas day arrived, Connor was ready. He was a college graduate, but his mom didn’t know that, yet.

“My sister was in on the surprise, too. But we were able to keep it a secret from my mom – she had seen me studying hard, but had thought I wasn’t on track to graduate until several months into 2017,” said Connor. “But in reality, I already had my diploma set in a frame. And attached to my diploma I had written her a note: ‘We don’t work harder because of you, we WANT to work harder because of you.” When she opened his present, Connor’s mom burst into tears.

“It is important to our mom for her kids to have a better life than she did. And she believes that getting a college education is the best way for us to have the opportunities she never did,” said Connor. He added, “Coming into contact with PelotonU, learning more about affordable and flexible college options like StraighterLine and WGU was a gift to both of us. My mom wants her kids to have a better life – she wanted me to earn my college degree. I was able to give that to her. I am a college graduate.”

Connor earned his Bachelors of Arts in Business Management at Western Governors University in December 2016. Thanks to StraighterLine, the support he found at PelotonU, and the competency-based degree program at WGU, he was able to give his mom what she wanted most of all for him – a college degree. Congratulations, Connor!

Ready to get started on your degree with StraighterLine? Sign up for a free trial today!