Why Do College Degrees Cost 1,000 Percent More than they Did Three Decades Ago? 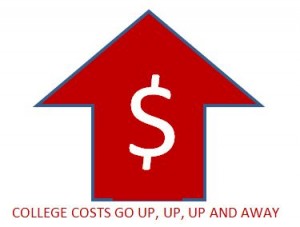 “The Student Debt Crisis,” a recent post from the Center for American Progress, points out that the cost of college has increased far faster than the cost of just about anything else you can name. To quote from the article . . .

“In the past three decades, the cost of attaining a college degree has increased more than 1,000 percent. Two-thirds of students who earn four-year bachelor’s degrees are graduating with an average student loan debt of more than $25,000, and 1 in 10 borrowers now owe more than $54,000 in loans.”

All those statistics are remarkable enough. But today, let’s just focus in on the fact that the cost of a college degree has increased 1,000% since 1982. Our editors put together this list of statistics, which should put the problem in perspective . . .

Why have the rising costs of college outpaced the rising costs of just about everything else? One reason is that a college education is a pretty expensive product to produce – at least it is if you produce it the way that American colleges do today. They have faculties, administrators, support staff, buildings to heat and maintain, athletic programs, parking lots to plow, dining halls to stoke with food, and lots more. Then there are the extras that many colleges have added to the mix – stuff like climbing walls, student centers with fountains and soaking pools, and dorms with nothing but single rooms with private bathrooms.

That could explain why the cost of courses at StraighterLine remains so reasonable. (If there’s a climbing wall in our offices, we haven’t found it yet.) Check out StraighterLine’s innovative pricing plans. You can subscribe for a base fee of $349/semester. (Extra fees for individual courses apply.) Even if that $349 fee increased 1,000%, it would only hit $3,490 a semester. Even that is miles cheaper than what you would pay for a semester of college just about anywhere else.

Why Is College so Expensive?
College Should Be . . .
Burck Smith on the Changing Model of Education
It's Time to Cut Tuition in Half
The New York Times Cites StraighterLine as a College Cost Innovator