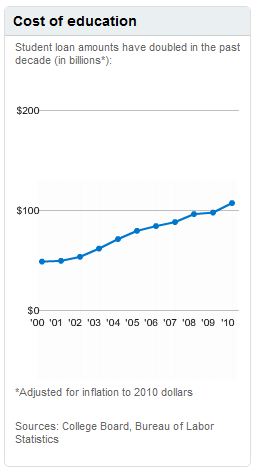 “Student loans outstanding will exceed $1 trillion this year,” an article just published in USA Today, reports that student debt in America has reached an all-time high.

Here are some statistics that the article cites . . .

If you’re a student who is sinking in debt, we don’t have to explain what the effect has been on your life. Chances are you have moved back home with your parents. If you have a job at all, a huge percentage of your earnings is probably earmarked for repaying your loans.

Debt is causing more widespread economic damage too. Students who owe large sums often will delay buying homes, buying cars, and even getting married. This will exert a downward force on the economy and slow its recovery.

The only solution is to cut the cost of college, of course.  We can wait for less expensive educational options to arrive, or take advantage of those that are already available. Or we can wait until the government takes action to reduce the cost of American education – something that is unlikely to happen in the current cost-cutting climate in Washington.

And once again, students are caught in the middle of a strange drama where the cast is made up of schools with immense tuition costs, lenders that charge too much for loans, and a government that is either unwilling or unable to help.