Liberty University, a unique university with deeply Christian values, has been making the news lately. Earlier this month, its commencement speaker was 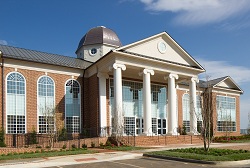 Mitt Romney, the Republican presidential nominee. On May 15, the Liberty men’s golf team advanced to the NCAA finals. And on that same day, the trustees of the university announced that the school’s financial assets had reached $1 billion, putting the school solidly in the ranks of America’s most financially secure educational institutions.

Liberty University, located in Lynchburg, VA., was founded in 1971 by the late Dr. Jerry Falwell.  Dr. Falwell had a vision to make Liberty University is the largest Christian university in the world, and that vision has now become reality. The University’s stated mission is to “Train Champions for Christ.”

Liberty now offers more than 230 programs of study on its 6,500-acre campus. With more than 12,000 resident students from all 50 states and more than 70 foreign countries, Liberty's campus is vibrant and full of life. Sports are part of the culture at Liberty, which fields 20 NCAA Division I Teams and a variety of club and intramural teams.

Liberty also strives to keep its costs low. In fact, it costs about 51% less than the average private college in America. Financial aid is generous.

And if you have been homeschooled, Liberty has laid out a special welcome mat for you, called the Advantage Program. There is nothing quite like it anywhere for students who have been schooled at home, and who are now ready to move on to college.

Now that Liberty University is a StraighterLine Partner College, perhaps you should consider making it part of your educational plans!

Making the Best College Choice Possible
Should a Bible College Be Part of Your Educational Plans?