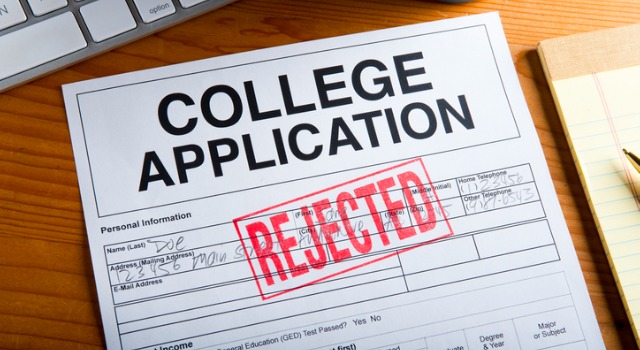 Here are 10 other crazy blunders that students have made when applying to college – some of them so ridiculous that they resulted in immediate rejection.

“I am here to take Geoffrey’s interview”

A student failed to arrive for his college interview. But his mother showed up. “Geoffrey is so terribly busy with sports and studying and applying to college that he just couldn’t make it,” she explained. “But he is a wonderful boy and I know everything about him, so just pretend I’m him.”

Source: I heard this story from an admissions officer at a competitive liberal arts college while I was taking an admissions tour.

Showering an Admissions Officer with Presents

It all started one day when a cake got delivered to the admissions office of a college where I used to work. It came from the parents of a student who was applying. They weren’t subtle about it – they signed the card and said that they hoped that their daughter would get in. In the months that followed, other presents followed until the college called the parents and asked them to stop.

Result? The admission office ignored the parents’ crazy tactics but rejected the student anyway, for other reasons.

Source: Personal experience while working at a college.

A student showed up in a college admission office, took a tour, and attended an information session. As he was leaving he said to the receptionist, “Okay see you tomorrow.” He came back the next day, and the next, and the next. He showed no sign of disappearing and when an admissions officer talked to him he said, “But I thought perseverance was a good thing.”

Result: The kid got rejected, but for other reasons.

Source: An admissions officer at a college in the Midwest told me this story.

Hitting on the Tour Guide

“After I led an admissions tour, this guy who was on the tour came up to me and hit on me,” recalls a young woman who leads campus tours at a large Midwestern state school. “To make it even more idiotic, he was wearing a name tag. That made it easier for me to go back to the admissions office and say, `Don’t admit this guy . . . he’s a jerk.’”

Result: The “jerk” never did apply to the school, so it was a wash.

Source: I was told this story by a high school guidance counselor; the quotes above are a paraphrase of actual conversations that took place.

Back in 2011, a young man moved onto the Harvard campus and simply started attending classes. He even slept in a dorm. Apparently he thought that simply showing up was a way to get into college, but it didn’t work.

“What I learned when I was stoned”

Result: Rejection in most all cases.

“This mirror is my essay”

This happened at a small liberal arts college that is well known for its programs in dance, theater, writing, and the visual arts. The application for admissions asked for an essay, but one student sent in a mirror instead, with a note that said only “LOOK.” Apparently, he was making an artistic statement of some kind.

Result: The kid actually got accepted.

Source: I heard this story while I was taking an admissions tour at the college in question.

“I already got accepted by Yale”

In an interview with an alumnus of a well-respected university, an applicant said “Maybe I'll come to your school. I have already been accepted by Yale.” The only problem was, the guy’s claim was obviously false. If he had been accepted by Yale via early decision, he was contractually bound to go there, and he couldn’t interview anywhere else.

Source: I was told this story by a university admissions officer.

“I love Tolstoy and I play the violin”

A student walked into the interview room with a copy of War and Peace under one arm and a violin case under the other. “She propped the violin against the wall and dropped War and Peace right in the middle of my desk where I couldn’t miss it,” the interviewer recalls. The interviewer realized that she was witnessing a piece of theater, but gave the student positive marks for gumption.

Result: Acceptance, but not because of the violin or the Tolstoy

Source: I was told this story by a university admissions officer.

In an interview, an applicant smiled enthusiastically and said, “I love Bates College and I really want to come here!” The only problem was, he was visiting Colby College at the time, and was taking an admissions interview there. The admissions officer gently corrected the student and the interview continued. [Note: I have changed the names of the colleges, but this story is 100% true.]

Result: The student was admitted anyway.

Source: I was told this story by the parent of the student, who figured out which college he was attending before he actually arrived the following September.

You don't have to be admitted to college before making progress on your degree. StraighterLine has over 150+ accredited partner colleges that guarantee credit transfer of our courses based on the course equivalency guides that we have with each school. Thousands of other schools have accepted our courses for credit.