Working in the Office vs. Working on The Office

Working in the Office vs. Working on The Office

But that’s for another day. What I wanted to talk about is on my list of unappreciated things: acting and higher education. People often assume that movie stars are all high school dropouts who, through a series of amazing luck and seedy dealings, made it to the top. Actually, there are many famous actors who not only have four-year degrees, but four-year degrees from prestigious schools like Brown and Harvard. I kid you not!

I hope you watch The Office, because I’m going to be throwing some intense Dwightage all up in here. The TV show is a great example for this post because it sort of spans both topics: 1) Acting requires an education, too and 2) Resign yourself to the fact that most Americans are stuck in that (slaving in a cubicle) type of job. The lucky ones only have to ACT like people stuck in an office job. 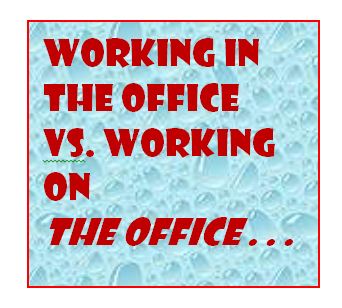 In case you didn’t notice, that’s most of The Office cast. And even though they only pretend to do those jobs, you can actually get a degree that is designed for those jobs. There are a lot of fantastic jobs as secretaries, personal assistants, office managers, Assistants to the Regional Manager, and more. Degrees aimed for office jobs are usually BA’s in English or business degrees, depending on the job you want.

Moral of this story: If you have the skill for it, I’d definitely root for being a famous actor and simply act like you work in an office. I mean, seriously. John and Jenna were making $100,000 an episode by the fourth season!

Just kidding. As always, the moral of the story is that education always pays off, no matter what job you eventually get. StraighterLine’s easy to use and informational website is filled with ways to get on the right track towards higher education. No matter what path you decide to take, StraighterLine is sure to have classes that will be right up your alley!

Danielle Koons spends her time going to school for a stupid Bachelor of Science degree, smelling like wet dog (courtesy of her job as a groomer), and pretending to be a famous writer. But not a boring stuffy writer. A cool writer like Lewis Carroll, so she can ignore the “rules” of the English language and make up her own words.

I Like to Watch Cops. Do You Want to Be One?
Don’t Read This Unless You Want To Help People
All about Going Back to School, Buying Books, Dropping Classes and Wishing I Had a Donkey