Previously on this blog, we’ve written about students who have graduated college owing $25,000, $100,000 or even more. Like most observers, we wondered how recent grads could ever repay that much money.

Now it turns out that graduating with a lot of debt is even more troubling than we realized. Here are some of those reasons, as explained by Judith Scott-Clayton in a post, “How Worrisome is College Debt?” on her New York Times Economix blog: 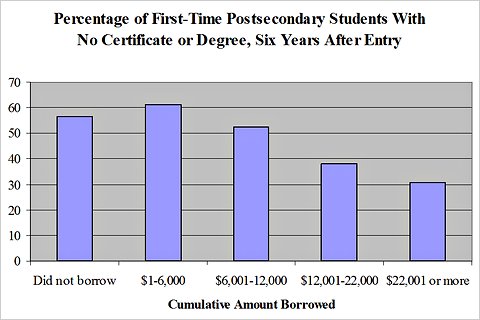 There’s a disparity between the amount owed and recent graduates’ income. It is true that grads earn more money over their lifetimes than non-grads do. (Median annual earnings for full-time workers with a bachelor’s degree are around $53,000, compared to $33,000 for those with only high school diplomas, Scott-Clayton explains.) The problem is that grads are expected to repay their loans in a relatively short period of time after they graduate, not over a span of years and years. So the crunch of owing money is most acute in the years immediately following graduation.

Not all graduates find jobs quickly after they graduate. If all a grad can find is a job that pays, say, $30,000, he or she is going to have a hard time paying living expenses and repaying a big loan at the same time.

Not all people who incur college debt graduate. See the graph that accompanies this post, from the U.S. Department of Education. Here’s an important point we hadn’t considered in the past – the fact that it is quite possible, as Scott-Clayton explains, to go to college for a year or two, drop out, and still owe $20,000 or more in student loans. She also mentions that job prospects for college drop-outs are not statistically much better than those of high school graduates.

These are all pretty compelling arguments for saving as much money as possible on college costs and keeping borrowing to a minimum. That is another reason why judicious use of cost-effective online courses can be one of the best tools in any student’s debt-reduction arsenal.

50 Ways to Leave Your College
Dropping Out of College? Aren't You the Smart One?
32 Benefits of Online Learning
Support Kelli Space in Her Efforts to Repay Her Student Loans
Take Control of College!
Seven Things Every Parent Needs to Know about Paying for College
Why Do Students Plan to Drop Out of College?