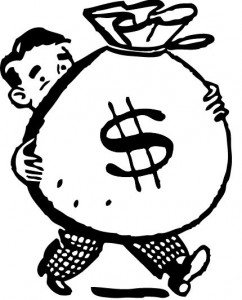 It’s another reason why you can save a lot of money by taking courses online at StraighterLine instead of attending a regular brick-and-mortar college. (You’re already saving thousands of dollars on tuition fees and the cost per credit, and now you can save even more.)

Let’s take a look at some typical “extra” college charges that can never apply at StraighterLine . . .

And then there are other fees too, which may apply. For example, some colleges charge a yearly fee for having a phone (!!!) in your dorm room that you’ll never use. Others charge a yearly technology fee. And then there’s more, like membership fees if you decide to join a frat or a sorority, and the cost of renting a cap and gown at graduation.

That begs the question . . . why do some students like to be naked under their robes at graduation? It’s not because they are merry pranksters. It’s because they can’t afford clothes after paying all those ridiculous fees.

Related Posts
Applying for Scholarships Or as I like to call it, “Winning at Tuition”
Unusual Sources of Financial Aid
Seven Things Every Parent Needs to Know about Paying for College
Why Is College so Expensive?
Burck Smith on the Changing Model of Education
It's Time to Cut Tuition in Half
The New York Times Cites StraighterLine as a College Cost Innovator