Shut Out of Class in California? Western Governors University Could Solve the Problem for You 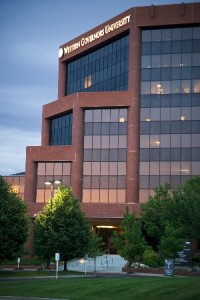 Is your California community college in the throes of a budgetary crisis? Are classes being cancelled? Did you just get shut out of a course that you need to graduate?

If so, StraighterLine has a solution for you. Why not leave the troubles of the California community college system behind and enroll at Western Governors University instead? Thanks to StraighterLine’s Partner College program, doing so is easy. Western Governors University (WGU) will accept the credits that you have earned after you have completed your coursework at StraighterLine and in only a few months, you could be attending WGU, a solid and respected university.

And in case you think that WGU sounds too good to be true, it isn’t. In fact, hundreds of students from California have now enrolled in WGU through StraighterLine’s Partner College program. Just ask those students. There’s nothing theoretical about it.

WGU is the only university in the U.S. offering competency-based degree programs and the only non-profit fully online university in the country. WGU offers a variety of terrific degree programs in fields such as Business, Education, Information Technology, and Healthcare Professions, including nursing. Since its inception in 1997, WGU has grown into a national institution, serving students in all 50 states.

"WGU can work in anybody's life,” a recent graduate states. “You can work at your own pace, if you need to accelerate or feel you need to take extra time in classes - you have that option. Anyone who is serious about their education can be successful here.”

Don’t overlook this opportunity. If you are stalled in one of California’s community colleges, StraighterLine’s direct path to WGU offers you a realistic way to make your educational dreams come true.

If you’re a student at Los Angeles Pierce College, February 4th will be your last day to register for classes this term. Will you get the classes you need? If not, StraighterLine could have the courses you are looking for.