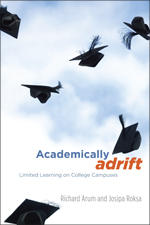 “A decade ago the United States led the world in the number of college graduates. Today this is no longer the case. Academically Adrift raises serious questions about the quality of the academic and social experiences of college students. Armed with extensive data and comprehensive analyses, the authors provide a series of compelling solutions for how colleges can reverse the tide and renew their emphases on learning. This first-rate book demonstrates why colleges, like K–12 institutions, now more than ever require major reforms to sustain our democratic society.”

American colleges and universities – even the most prestigious and respected of them – have been coming under fire lately for charging too much. Now a new book, Academically Adrift, adds an even more serious charge:

American colleges and universities aren’t doing a very good job of teaching students anything either.

The authors of the book, Richard Arum and Josipa Roksa, tested the academic progress of 2,300 students during their college years to gauge how much they were learning. Here are some of the findings . . .

Thirty-six percent of students don’t improve their knowledge at all during four years of college.

Forty-six percent of students don’t learn much of anything during their first two years of college.

Students who major in communication, business, and education learn the least in college. Interesting: Liberal arts majors learn the most.

There are lots of other interesting findings in Academically Adrift too, such as the fact that fraternity members learn less than other students do. Also, participation in clubs and off-campus activities actually lowers academic achievement.

It would be easy to blame students for the problem – but it would be a mistake. We think the real problem is a lack of accountability on the part of many colleges, which seem to lack the academic rigor to monitor what is happening in classrooms.

We predict that this new book is going to cause a ton of controversy in academia. Stay tuned - we’ll be watching and reporting on it in this blog.

Can You Finish College in Three Years?
Information Colleges Don't Want You to Know
Scrambling the College Degree Timeline