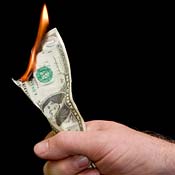 Everybody loves community colleges. They teach skills that prepare students for real-world jobs. They help tens of thousands of American students get started in college. They save those students lots of money.  They provide a great alternative route to college for students who didn’t perform well in high school.  They also serve as a launching pad for students who want to transfer to four-year colleges and universities. And president Obama has stated that he is counting on community colleges to play a major role in increasing the number of American college graduates.

Yet a report, “The Hidden Costs of Community Colleges,” just released by American Institutes for Research, points out that there is a huge downside too. Community colleges, the report finds, are costing American taxpayers nearly $1 billion annually – an expense that is ramping up due to the high dropout rate at community colleges.

“Given the central role that community colleges play in the nation’s plans to regain its position as the number one country in the world when it comes to college-educated adults, and given the increasing fiscal difficulties facing individual states and the nation as a whole, it is clear that `business as usual’ is far too expensive . Better ways are needed to ensure that the students who enter a community college expecting to earn an associate’s degree or a certificate finish the first lap and ultimately cross the finish line.”

Here is some data from the report that documents the problem. All figures pertain to five academic years (2004–05 through 2008–09):

If you add up those figures, you will discover that taxpayers spent nearly $4 billion in federal, state, and local taxes on students who dropped out.

This is discouraging news, to say the least. We already knew that it was time for just about every other kind of college and university to be revamped, from state universities to middle-tier liberal arts colleges. Now it turns out that community colleges are in the same costly pickle as everybody else.

This crisis argues for an increase in computerized instruction.  Distance learning, along with its many other virtues, has a proven ability to deliver quality instruction to the largest number of students at the lowest cost.

Do you agree? Or if you can think of a solution to this latest – and possibly greatest – problem in American higher education, why not take a moment and post your reply below?