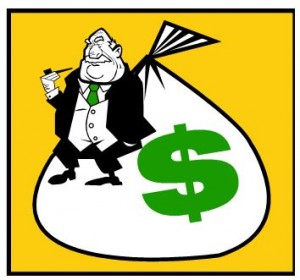 “What Public-College Presidents Make,” an article that The Chronicle of Higher Education just released, offers some eye-opening statistics like these . . .

Those were the top four wage-earners. But as the Chronicle reports, lots of other college presidents are earning big bucks too. You can see a list of them here. (By the way, the top earners are pretty much men; of the 20 highest-paid presidents, just five are of the female persuasion.)

Heck, Why Not Throw In a House Too?

Many of the top-earners also get free houses as part of their compensation, in addition to the figures cited above. They get other perks too, such as private jet rides.

How Can those Salaries Be Justified?

In a time when tuitions are surging and students are graduating college with staggering debt loads, how can any university justify paying its president $1 million or more?

There’s a simple answer to that question. Presidents who raise tons of money command big bucks. So in a sense, it is not possible to balance presidential pay against rising tuition.

But at the same time, those lofty salaries serve as just one more indication of how weird things have become in American higher education. Colleges and universities also spend unconscionable amounts of money on athletic programs. They give preferential treatment to athletes and the children of alumni and reject more qualified students. They build buildings that they can’t exactly afford to attract applicants. On and on it goes.

But let’s boil it down. If you’re a student who can’t afford to pay $50,000 a year to attend a college where the president earns more than $1 million, how do you square that up? Oh, there are reasons and justifications. But when you boil it all down, how can it possibly make any sense?

Information Colleges Don't Want You to Know
College: Why Pay Sticker Price?
Required Reading for High School Grads and their Parents
Why Is College so Expensive?