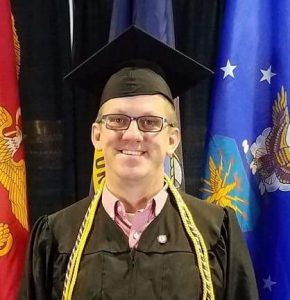 Jason Jensen is an Army veteran, lives in Indiana, has 2 children, and works full time. Before Jason went back to college to earn his bachelor’s degree, it had been nearly 20 years since he had last attended school.

“The hardest part about going back to college was signing up, the second hardest was showing up," says Jason, adding, “It took me 20 years to go back to school and earn my degree, but my priorities had changed since high school, and I was ready to earn my college degree to elevate myself and my career.”

In high school, Jason “barely got C’s” as a student, and he’s first to admit that he had “different priorities,” but now as a married father of two, he has a different set of goals and is focused on moving his career forward. “I’m married with 2 kids. My family is ultimately who I’ve done all of this for. That my kids saw me go back to school, earn a 4.0, and accomplish an important goal is immeasurable.”

Earning College Credit in the Military and Online

Jason served in the Army for 8 years, spending 11 months in Bosnia, and it is during that time he made the decision to go back to school to earn his degree. According to Jason, the deciding was easy, but the actual getting started was harder. He says, “The hardest part about going back to college is signing up, the second hardest is showing up. It took me 20 years to sign up and show up.”

“From all the courses I completed through the military and was intending on using for my degree at IWU, three of my electives didn’t transfer. I was disappointed,” says Jason, adding, “I was so close to earning my degree -- and I wanted to graduate with my class -- but I still needed to complete these three electives that I thought I had already taken care of.” Not sure what his options were, Jason turned to his student advisor for advice -- that’s when he first heard about StraighterLine.

Knowing that Jason was looking to complete his elective courses as quickly, flexibly, and affordably as possible, Jason’s advisor at IWU recommended that he look into taking online courses at StraighterLine. “I had never heard of StraighterLine, so I was a little hesitant about enrolling and trying something new. The courses were so inexpensive I thought they were definitely be worth a try,” says Jason. He adds, “I signed up to take three courses at StraighterLine, got to work, and was able to complete all three classes in three months. I ended up only paying around $500 total; at IWU, I would have paid $1,400 for each class. StraighterLine was a huge savings.”

Before enrolling, Jason was concerned that taking classes at StraighterLine was going to be complicated, that he might waste a lot of time just learning how to navigate the courses online. He says, “At first, I was dreading getting started. I thought it was going to be a huge hassle to figure out how to take the classes -- and that it was going to be complicated to navigate. I thought the courses might be boring. But fortunately, neither was the case. It only took me a half hour to understand how to navigate the courses; StraighterLine is really straight forward. I started with Introduction to Communications and Environmental Science -- and though they were challenging, the reading material was really interesting, and I learned a lot.”

Advice to Other Adults Considering Earning Their College Degree

“Don’t be afraid to sign up,” Jason advises. “And after you sign up, make sure you show up. Those are the two hardest thing about going back to school: signing up and showing up."

Jason completed his bachelor’s of science degree at Indiana Wesleyan University in December. Thanks to StraighterLine, he completed 3 of the elective courses he needed to complete his degree program at an accelerated rate -- and graduate with his class.