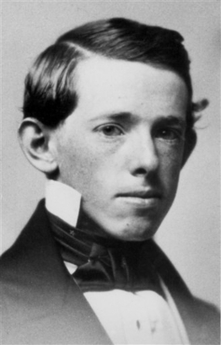 Okay, the headline of today’s post is a lie. Horatio Alger, who lived from 1834 to 1899, did not go to college online. What he did do, however, was write more than 125 of the most successful novels ever published in America.

His books told young people how to succeed in life. Think of him as the Tony Robbins or the Norman Vincent Peale of his day. By making a fortune as a writer, Alger was way ahead of his time. But to tell the truth, all of his novels told pretty much the same tale. His heroes were always poor young men (apologies, ladies) who “pulled themselves up by their bootstraps,” and made something of themselves.

If you take a look at the titles of some of his bestsellers, you will get the idea . . .

The Odds Against Him; or Carl Crawford's Experience (1890)

The strategies that Phil, Carl, Ben and all the other young heroes applied to building their success can still be used today by people who want to better themselves. In other words, by online learners. Let’s see how these principles still work today . . .

First, don’t be fooled by dishonest people. All of Alger’s stories included shady characters who tried to lure the heroes into an illicit life. The villains were sleazy, like street crooks who were trying to lure young men into criminal gangs. But guess what? Alger’s heroes always took the higher road and won out in the end. The lesson for online students? Don’t be fooled by dishonest schools and promises of quick riches.

Second, be resourceful. Alger’s heroes didn’t wait around for handouts. They worked round the clock selling newspapers or walked to distant cities in search of opportunity. Like online students, they were highly self-reliant and disciplined.

Third, be on the lookout for genuine opportunities. Alger’s heroes could spot real value when they saw it, like the jobs that would let them make their mark in the world. Like distance learners, they relied on their own judgment to keep their lives on track.

Fourth, work hard and make something better of yourself. Even though Alger’s heroes had lucky breaks (like finding a wealthy woman’s necklace and returning it to her), they knew that opportunity didn’t come without hard work. Just like distance learners, they were willing to labor to win a better life.

Fifth, take risks. Alger’s heroes were willing to expose themselves to physical danger if doing so meant they were doing the right thing. Like distance learners, they were not afraid of challenges.

Alger’s heroes had other positive traits too. They were faithful friends who never forgot a favor. They extended a helping hand to friends who had made bad decisions in their own lives. They were sober, modest and polite. Those virtues might not all pertain to distance learners. But when you bundle them all together with pursuing a college degree online, the result is a very powerful formula for personal success.