High School Graduation Rate at Its Highest Since 1976 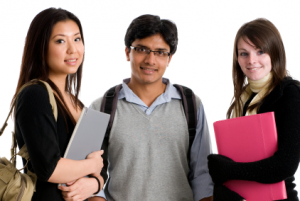 The graduation statistics were released by the U.S. Department of Education earlier this month, and have been reported in many newspapers nationwide.  Here’s an overview of what is going on . . .

That’s good news. But let’s see . . . there are roughly 3 million students graduating high school every year now. How many of them will be able to start college this year? In fact, is there room in all the college classrooms in America for that many students? Definitive statistics are hard to find on how many American students are enrolling in four-year colleges this year. However, here’s an interesting statistic from the National Association of Independent Colleges and Universities . . .

“There are 1,600 private, nonprofit institutions nationwide. Half of the nonprofit colleges and universities in the United States are private. We enroll 3.4 million students.”

Remember, that number does not include the number of American students who are enrolled in state schools. But even so, it shows that all of America’s private colleges and universities can only accommodate about 850,000 students in each of their freshman, sophomore, junior and senior classes. I divided 3.4 million (the number of college grads) by 4 (the number of years in college) to come up with that figure.

So the rough numbers show that America’s private colleges and universities can accommodate less than one-third of all the students who are graduating from American high schools today.

What will make up for the shortfall? State colleges and universities, community colleges, in part. But the handwriting is on the wall, and that handwriting is scribbling the words, “online college classes.”

With so many students eager to go to college and a static number of seats in American classrooms, online education really is the wave of the future, if just for the numbers alone.