Forty Degrees Below Zero and Dropping . . . Occupy Alaska Protestors Are the Most Determined of All

Forty Degrees Below Zero and Dropping . . . Occupy Alaska Protestors Are the Most Determined of All 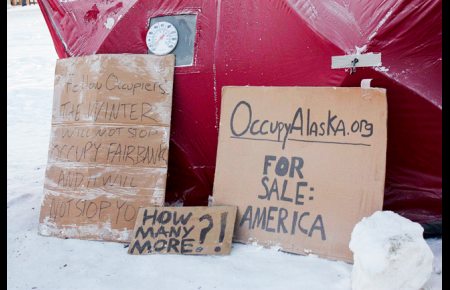 Talk of your cold! through the parka’s fold it stabbed like a driven nail.
If our eyes we’d close, then the lashes froze till sometimes we couldn’t see.

Anyone who doubts the commitment of Occupy protestors needs to know about the hardy protestors who are part of the Occupy Alaska movement. According to a recent report on Reuters, Occupy protestors in Anchorage and Fairbanks are stalwartly refusing to give up and fold their tents, even after spending several weeks camping outside in temperatures that have plunged to minus 40 degrees.

According to a news report on NPR, one of the most intrepid Alaska protestors is Ethan Sinsabaugh, a student at the University of Alaska in Fairbanks.  He told NPR, "We just need warmth and shelter . . . You're gonna take away our ability to peacefully assemble, and we feel that goes against the Constitution."

What Do Occupying Students Want?

The list of Occupy student demands is wide, wild, and hard to pin down. But here are some that we have heard in the news over the last months . . .

Are all those demands going to be met? It sounds doubtful to us. But when protestors up in Alaska are willing to just about freeze in order to be heard, you know how determined they are.