Busted Myth of the Week: It's an Equal Playing Field for Men and Women in American Higher Education Today

Busted Myth of the Week: It’s an Equal Playing Field for Men and Women in American Higher Education Today 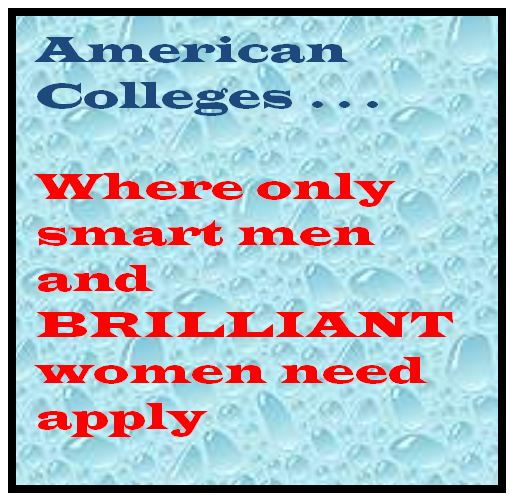 There is a common belief today that the men and women enjoy equal status when applying to college – that discrimination is a thing of the past and that women stand just as good a chance of getting into top colleges as men do.

It’s not true. In fact, women still suffer from discrimination in American colleges and universities in ways that could surprise you.

To quote from an article in Mother Jones, “In recent years, several college leaders have admitted that their institutions give a boost to male applicants to maintain gender balance on campus. Most students of either sex, they point out, prefer such balance. If Vassar accepted equal percentages [of the applicant pool] of each sex, women would outnumber men by more than 2 to 1.”

It’s an open secret in American higher education. If colleges did not consider the gender of applicants – if they only admitted men and women who had achieved the very highest grades and standardized test scores – some of those schools would end up with incoming classes that were comprised of about 80% women.

Is It a Cover-Up?

If you visit the websites of colleges that post admissions statistics – Princeton, the University of Virginia and Yale, for starters - you will discover that data about the percentages of male and female students who have been accepted is simply not there.

Princeton’s website, which offers more information than most, only reports that women make up 49% of the class of 2015, vs. 51% men. The website also reports that 8.5% of all applicants are admitted. But statistics are not given about the percentages of male or female applicants who are given offers of acceptance.

How about data from the U.S. Department of Education? You can look all you want, but you won’t find the data you are looking for. You will discover that even The Condition of Education 2011, the most extensive compilation of educational statistics available, contains no data on the percentage of women who are admitted to college, vs. the percentage of men.

The result is that it is harder for extremely qualified women to get into top colleges than it is for men. So discrimination lives on.

Why Elite People Have a Monopoly on America’s Elite Universities
Busted Myth of the Week: It’s Best to Attend an Elite College
Applications Surge at Top Colleges and Universities
The Changing Face of College Status