Creating a Flexible and Affordable Path to a College Degree. A StraighterLine Success Story 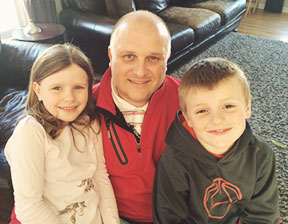 Chris DuBose had over 20 years of business experience working for a beverage wholesaler, enjoyed a large amount of career success, yet had never earned his college degree. He had “always planned on earning his college degree, someday,” yet someday never seemed to arrive.

Until one day, in his early forties, something changed. Chris realized it was now or never; it was time to earn his college degree.

Needing a Degree for a Promotion

Chris DuBose had reached a critical point in his career where not having his degree was limiting his opportunities at work, including an opportunity for promotion.

"I was offered to take on an important new role at our parent company; a big promotion with a raise, in management. I was all ready to get going, and just needed to complete some paperwork, and that included providing some information about my education, including college.”

Chris’s career was at a crossroads, and he felt like he had stepped on to “an emotional roller coaster.” On one hand, he currently enjoyed a great deal of career success, had time to coach his children’s soccer and lacrosse teams, and had a supportive wife who worked full-time as a teacher. On the other hand, he felt “[earning his degree] was now or never,” so Chris made the decision, at the age of 42, to “get it done.”

Once Chris made the decision to go back to school, there was not stopping him. He first investigated his options online, looking for ways to use his on-the-job training and life experience to rapidly and affordably earn college credit. During his research, he discovered some test-for-credit opportunities options like CLEP.

“I signed up for a CLEP test in a subject area I felt I had already mastered - and I missed passing by just 1 point. That’s when I decided there must be a better, less risky, way to earn college credit online. I wanted to find something online that would guide me directly through the material I needed to know.”

His search for something better eventually led him to enroll in StraighterLine courses and in a degree programs at StraighterLine partner, Excelsior College.

As he researched college degree programs, he knew he wanted to attend a school that would accept a lot of credits from alternative college credit providers. He was glad when he found StraighterLine partner, Excelsior College, realizing that it would accept a large number of transfer credits, and allow him to create a low-cost pathway to his college degree.

Thanks to its generous transfer policies, he decided that enrolling at Excelsior made the most financial sense - and would accommodate his desire to earn his degree at an accelerated rate.

Through the recommendation of an online degree forum as well as his advisor at Excelsior, he found StraighterLine. “It had been “over 22 years” since Chris had been in school, and he was extremely motivated to find “a highly efficient and affordable way to get a degree. StraighterLine’s low-cost courses were just what he was looking for.

Making the Decision to Earn an Affordable College Degree Online

Because he worked full time and had a family, he knew that completing his degree 100% online would be the way to go. Taking classes online allowed Chris to complete courses at his own pace, and accommodate his busy schedule.

"I work all day from 7:30am - 5:30pm. I have kids. In order to complete my degree, I had to get on a pretty strict schedule. But at least with online courses, I was able to come home, plan on taking one of my StraighterLine tests or exams before dinner, and spend some time with my family. After the kids went to bed, I could go to my home office and study. Online education has been essential.”

When Chris decided it was time to go back to school, he took his degree goals as seriously as he took his job. He realized that completing as many courses as he could through StraighterLine would significantly reduce the overall cost of his degree, plus having the added benefit of reducing the overall time it would take for him to get his diploma.

“By having a degree plan, I knew I could transfer 18 StraighterLine courses (54 credits) into my degree program at Excelsior. The first course I took at StraighterLine was Western Civilization. It was great. I learned some new things - and it got me the college credit I needed. And I just picked it up from there and ran with it, eventually passing 17 other StraighterLine courses.”

Chris used his ability to take courses at his own pace to accelerate the completion of his degree. He also relied on his organizational skills obtained from his years of work experience to keep his degree plans on track.

"I kept track of all my courses on a spreadsheet, including what I needed to accomplish, by when. With StraighterLine, I was in control of my deadlines, schedule and goals.

StraighterLine made it easy for Chris to successfully transfer 18 low-cost StraighterLine courses to Excelsior College, for a total of 54 credits – and over $20,000 in savings!

"StraighterLIne is extremely helpful for [an adult learner] looking to earn their college degree at a low-cost and at an accelerated rate. StraighterLine courses give you what you need to know, when you need it.”

In total, between his StraighterLine courses, upper level credit earned through DSST, and a couple of CLEP exams, Chris was able to transfer 103 credits into his degree program at Excelsior College, shaving years and thousands of tuition dollars off his total cost.

“StraighterLine is a great way to save a ton of money [on college]!”

Advice to Other Online Students

Chris has some words of wisdom for other adult learners: “Just do it! It looks like a lot [to earn your degree,] but just start climbing that ladder and you can do it.”

Chris was also quick to acknowledge that he had a great support team - and that his wife was  “a godsend.”

“I tell my friends who have kids going to college to see if their school will accept StraighterLine courses so they can save some money, particularly over summer break!”

Earning a Bachelor’s Degree for Less Than $10k

Thanks to StraighterLine, Chris is on track to earn his degree from Excelsior College for less than $10k. After he completes his capstone course from the school, he’ll be ready to graduate, and become eligible for a whole new set of opportunities at work. “StraighterLine’s flexibility was perfect. It’s awesome, and I can’t wait to celebrate my graduation!” says Chris. Congratulations!