How An Adult Learner Fulfilled His Dream of Earning a College Degree. A StraighterLine Success Story. 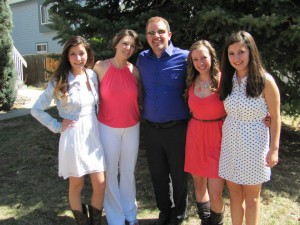 Johnny Chapman, a StraighterLine student, is fulfilling his lifelong dream of earning his college degree. We’re excited to share his story with you:

Transforming a Dream into a Reality

“I started college right after high school, but I dropped out, got married, started to work and had kids,” says Johnny. “I always planned to go back to school, but it never seemed to quite come together. It’s been 20 years but finally some of the pieces started to come into place. It’s always been a dream of mine to earn my degree.”

Johnny identified a degree program that interested him at Life Pacific College, a StraighterLine Partner College. He contacted Life Pacific to learn more about their Degree Completion Program, but was told that entry into the program required junior standing status. Johnny didn’t have enough credits to enroll, at least not yet. His advisor suggested that he start taking college classes at StraighterLine. Johnny set a goal to complete 8 courses within 10 months at StraighterLine to ensure he could start Life Pacific’s Degree Completion Program on time.

“My Children Have Caught the Educational Dream Too”

Johnny’s decision to go back to school has revived his love of learning, which caught on for his whole family: “When I started college, I simply wanted to finish my degree,” Johnny says. “Now it’s been almost two years, and I’ve realized how much I appreciate learning. I’ve modelled this for my kids and instilled in them the value of education. My children have caught the dream, and they’re pursuing careers that are relevant to their passions.”

After completing his StraighterLine courses, Johnny successfully transferred to Life Pacific College, where he is completing a bachelor’s degree in Ministry and Leadership. He will graduate in November ­– fulfilling his lifelong dream of earning a college degree. Congratulations, Johnny!

Have you always dreamed of going back to school to earn your college degree? Need some help getting started?